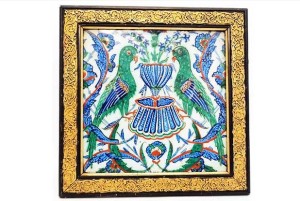 A rare and exquisite Islamic figural tile, which dates to the Ottoman Empire, will attract serious collectors when it comes up for sale in Devon next week. It was brought in to Rendells Fine Art, Stonepark, Ashburton by a client believing it to be Greek. However, cataloguer and valuer David Ship instantly recognised it as a highly prized Islamic tile, circa late 16th/early 17th century.

Read More: Rare Islamic Tile to be Auctioned in Devon