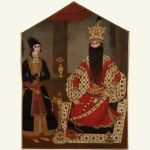 The Arts of the Islamic World auction to be held at Sotheby’s, London, on April 9th 2014 is led by a magnificent Qajar royal portrait of Fath ‘Ali Shah. Estimated at £1,500,000 – £2,500,000, this life-size portrait is one of sixteen that are recorded, of which only four are present in Western museum collections. Fath ‘Ali Shah was the pre-eminent Qajar emperor of Persia and, as a key patron of the arts, he commissioned a number of monumental portraits, using these images as tools of propaganda, immortalising his rule. This painting is attributed to Mihr ‘Ali, one of the preferred painters of the Qajar court.

Read More: Royal Portrait of Fath ‘Ali Shah to be Offered at Auction in London

See video: Anatomy of an Artwork – A Qajar Royal Portrait